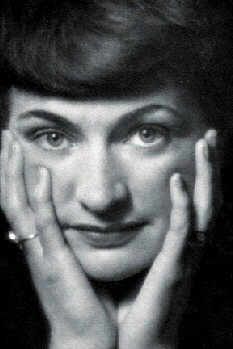 Born in Paris, Annette Faive spent her childhood and adolescence at rue Lamarck in the city’s 18th Arrondissement with her brother, André — two years her senior. From her earliest years, Annette grew up in an artistic environment. Her father, Victor Faive a wine merchant by trade, was an enthusiastic amateur actor and his wife Juliette, (born Nissen) was a practiced violinist with a remarkable contralto voice.

Annette’s education helped to develop her multiple talents. In the course of a brilliant school career at the Collège Edgar-Quinet, she won numerous medals, both for her sporting prowess and for her artistic talents (piano, singing, theater).

As her education progressed, she focused her attentions on the plastic arts and in 1932, after four years of studies at the Collège Technique des Arts Appliqués in Paris’s rue Duperré, she obtained her diploma. That same year, she enrolled at the Ecole Nationale Supérieure des Beaux-Arts in the atelier of Lucien Simon where Lucien Fontanarosa was. The latter was to become her life-long companion.

During her four years at the Ecole Nationale des Beaux-Arts, she received numerous awards: the “Prix des trois Arts” in 1933, the “Prix Lefranc” in 1934 and 1935, and the “Prix Marie Charles” in 1935. In 1934, in the midst of her studies, she received the schools’ and colleges’ professorship for drawing. In 1935, Lucien Fontanarosa received a grant to travel to Morocco. Annette accompanied him and returned with several works she had completed during the visit. In 1936, she became a member of France’s national society of fine arts, the Société nationale des beaux-arts, after presenting her work at its 1934 and 1935 exhibitions, and the equally renowned Autumn exhibition.

That same year, Lucien Fontanarosa was awarded the “Grand Prix of Rome”. After spending two years at the Villa Medicis, Annette and Lucien were married in Rome on May 13th 1939. This happy and fruitful period spawned numerous encounters and friendships with musicians, architects, sculptors, painters, and engravers. It also enabled the couple to discover a country that for them was an inexhaustible source of inspiration.

On their return to Paris in 1939, they moved into an artist’s studio in rue Compans near the Buttes-Chaumont. That same year, Annette collaborated on a project that had been awarded to Lucien to decorate one of the doors of the French Pavillion at the “Exposition de l’eau” (Water exhibition) in Liège, Belgium (36 square meters). Once again, the Société nationale des beaux-arts exhibited her works, and in 1942, the French State purchased a still life.

In 1942, 1944, and 1946, she gave birth to three children : Patrice, Fréderique, and Renaud. In the home, she managed to maintain an atmosphere of harmony in which Lucien could realize his works in silence alongside three budding child musicians. Relentlessly, she accompanied the efforts of each with indefatigable tenderness and enthusiasm. Artistic issues fused with the concerns of everyday life. Annette and Lucien constantly questioned themselves and worked fervently.

It was during this period of her life that her artistic abilities developed in numerous domains: including gouache, water color, and sculpture… In 1950, she produced the bust of Danielle Casanova, which can be seen to this day in the cemetery at Piana, in Corsica. At the same time, she also created busts of her children. In a parallel development, she produced a line of silk scarves which she signed under her maiden name of Nissen, a pseudonym which she had also used for her oil paintings in the 1940s.

In 1957, 1960, and 1962, she taught at the Ecole des arts appliqués Duperré in Paris. In 1960 and 1962, she sat on the proficiency committee at the Collège technique d’art appliqué in Paris. From 1961 until 1971, she was a professor of documentary drawing at the Union centrale des arts décoratifs in rue Beethoven in Paris.

In 1964, the Fontanarosa family moved to 32 cité des Fleurs in Paris’s 17th Arrondissement. Patrice, Renaud, and Frédérique, now professional musicians, set out on their own. As a result the pace of life in the home eased, and in 1967, Annette resumed her life as an artist with renewed vigor.
In the years which followed, she presented her works at numerous exhibitions in France : Creil (Oise) in 1971, Mantes in 1973, and Fontainebleau in 1975. In 1973, she was commissioned to paint the portrait of Michel Cépède, the then-president of the United Nations Food and Agriculture Organization. The portrait, measuring 95cm by 75cm, has adorned the wall of the organization’s council chamber in Rome ever since.

In 1975, the City of Mantes purchased one of her works. In February of the same year, the town of Vars, in the Hautes Alpes, devoted a special exhibition to her. Two months later, on April 27th 1975, Lucien Fontanarosa died. With the help of her children, she began the task of bringing together all the works that her husband had created. It became a fundamental desire of hers that the catalogue of his works should be allowed to express its power and eloquence, to diffuse its message of hope and integrity, and leave its mark on the era.
Numerous friends helped to develop and publish a book that same year which represented an initial summary of the works of Lucien Fontanarosa. For Annette, life became quieter. Every Wednesday, her six grandchildren came to visit. Their presence helped to break the silence and enabled her to experience the thousand and one fantasies of an affection shared.
With her artist friends, she organized live model sessions in her studios. Clowns, numerous personalities and nudes helped fuel her output.
Her travels (in Russia, the Alps, Switzerland, Egypt, and Venice) inspired her and resulted in a series of landscapes, compositions, and scenes from everyday life. Provence, where she had maintained a farmhouse since 1958, was to play a major role in her works. From 1976 until 1982, she exhibited her works each summer for two months at “La Bergerie” at the home of her friend Raymonde Dumas in Le Castellet in the Var. From 1977 onwards, she participated in numerous group exhibitions and expositions in France: Chaville, Sophia-Antipolis, Asnières, Chatou, Courbevoie, Maisons-Lafitte in 1977; Cormeilles-en-Parisis in 1978; Clichy in 1979; St-Jean-Cap-Ferrat in 1982; and Fontainebleau in September 1983. Her works were also presented at the Hélof gallery in Paris, and the Marie Cauvin gallery in Billom, Puy-de-Dôme in 1985; and at the town hall of the 1st Arrondissement in Paris in October 1986. In 1978 she was awarded the silver medal at the “Salon des Artistes Français” (Exhibition of French Artists). She continued to exhibit her work there and at the “Salon du Dessin et de la Peinture à l’eau” (Drawing and Watercolor Exhibition) until 1984. Both exhibitions were taking place in the Grand Palais in Paris.
In 1980, she received the Raymond Rivoire Prize from the Taylor Foundation at the Exhibition of French Artists.
Each December, from 1977 to 1987, she presented her works to a loyal clientele of amateur art lovers at her studio in the charming Cité des Fleurs in Paris.

From 1983 to 1988, she exhibited her works for two months each summer at “La Corsoise” in La Cadière d’Azur in the Var.
Between 1976 and 1987, she produced a total of 900 original works, including drawings, watercolors, and oils.

In 1985, on the loving advice of Stephan Löber, she founded the Lucien Fontanarosa Foundation with her children.

The presence and qualities of Stephan, who was appointed to run the foundation, gave Annette the assurance and awareness that the works of her husband would be nurtured, protected, and overseen with boldness, intelligence and sensitivity.

She supported those close to her with unlimited tenderness, and gave the world more than a thousand subtly poetic works each possessing a light that is quite incomparable. In effect, these powerful, masterly pieces of art were just as accomplished as her life.

After Annette Faive’s death in Paris in november 1988, the Lucien Fontanarosa Foundation took it upon itself to catalogue her works, increase its visibility, and to expand its reach to a wider public.
In 1989 and in 1993, as a homage to her, the French National Fine Arts Society presented a selection of her oils in their exhibition at the Grand Palais in Paris.

In December 1994, the Taylor Foundation opened its gallery in Paris’s 9th Arrondissement to the first retrospective that had ever been devoted to her.